In July 2017,  journalist, Martin van Beynen, released a podcast on Stuff called ‘Black Hands’. One week later, RNZ’s Kim Hill interviewed retired Canadian judge, Ian Binnie, about it.  Binnie was the judge originally appointed to investigate David’s compensation claim. He said ‘black hands’ was Van Beynen’s code for ‘David Bain is crazy’. Binnie also said forensic psychiatrist, Prof Philip Brinded, established  to the satisfaction of the jury that David did not  suffer from any form of mental illness prior to the killings.  See Prof Brinded’s psychiatric assessment of David here.

In other words, the entire ‘Black Hands’ podcast  is based on a fundamentally inaccurate premise. 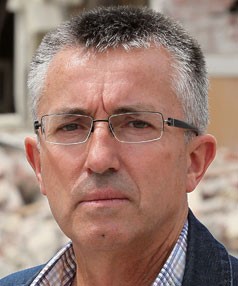 Martin Van Beynen is a columnist for the The Press in Christchurch. He’s followed the Bain case from the beginning and is clearly obsessed with it.  Right from the start, he was convinced David was the murderer. Twenty years later, despite the Privy Council declaration that there was a miscarriage of justice and the finding of the second jury that David was not guilty,  Van Beynen has been unable to accept reality.  And the reality is – he got it wrong.

But there’s money to be made. So in July 2017, Stuff released a 10 part podcast Van Beynen put together about the case called Black Hands.  Stuff promoted it with this headline: Why the David Bain story needed to be told one more time.  Van Beynen examines the evidence in detail – in minute detail. In the process, he loses all perspective. He’s so busy looking at the bark on the trees, he fails to see the forest – or that more than half the trees are missing because of the well-documented incompetence of the Dunedin police.

Here’s some of the evidence that Beynen was unable to examine: the carpet with the bloody sockprints – because the police allowed the house to be burnt down where the murders took place. The police also never bothered to test David’s or Robin’s hands for gunshot residue, and they never followed up the incest allegations against Robin Bain.  The police threw these evidential trees away before they even got planted.  Here’s their explanation for that…

When David’s lawyer, Michael Reed QC, asked the police at the retrial in 2009 why they didn’t investigate the incest allegations, Detective Senior Sergeant Jim Doyle said: “This was a homicide investigation, Mr Reed, not an incest investigation, and that was our focus.'”

Michael Reed responded: “Exactly, there’s the problem, Mr Doyle. You weren’t prepared and didn’t want to investigate Robin, did you? That’s the problem.”

Van Beynen fails to examine the police shortcomings and doesn’t even acknowledge that half the trees in the evidential forest are missing. He only looks at the decrepit, well worn trees that are still standing. The result is he only sees what he wants to see – just like the police, who at the time of the crime, turned a blind eye towards the allegations of incest. Using this myopic, half-missing methodology, Van Beynen still muses that David was the murderer.  So do the police of course.

One has to wonder – after all these years, why Van Beynen can’t admit he got it wrong? He has a reputation for solid investigative journalism. So why is he still in denial about the Bain case? Ian Binnie thinks its because Van Beynen is obsessed. In his interview with Kim Hill, Binnie said;

“I regard Martin Van Beyen as a kind of Inspector Javert in Les Miserables chasing Bain down through the ages.”

In case you’re not familiar with this reference, Wikipedia says:

Javert is a police inspector in Victor Hugo’s novel, Les Miserables, who becomes obsessed… Hugo depicts Javert as a character who is not simply villainous, but rather tragic in his misguided and self-destructive pursuit of justice.”

On the other hand, it may be that Van Beyen is obsessed because he has a brother who works for the police – the same police who destroyed or ignored so much of the  evidence in the case. And of course, the police also refuse to admit they got it wrong.

Or perhaps its because Van Beynen works for Stuff, and this is an opportunity for them to take his obsession with the case and make more money off it.