After he was found not guilty at the second trial in 2009, David made an application for compensation for the 13 years he spent in prison after being wrongfully convicted in 1995.  Justice Minister, Simon Power, appointed retired Canadian Judge, Ian Binnie, to examine David’s claim.  Mr Power  deliberately chose an overseas judge with an impeccable reputation to bring an independent perspective to what had become a very contentious  case in New Zealand. Ian Binnie’s investigation took about nine months.  In a lengthy report, he concluded that the police had made egregious errors, that on the balance of probabilities David Bain did not commit the murders, and that therefore he should receive compensation.
By the time Binnie finished his report, Mr Power had left parliament and Judith Collins was the Minister of Justice.  She clearly didn’t like Binnie’s conclusion that the police had stuffed up. So she claimed Binnie had got it wrong and went looking for another judge, Robert Fisher, to endorse her stance. In the process of reviewing Binnie’s report, she refused to allow David’s legal team to even see a copy. This lead to accusations of bias and unfair process and David’s team sought a judicial review of the process adopted by Ms Collins. She also made other serious errors of judgement and resigned as Minister after her involvement in the Oravida and Dirty Politics scandals.
Meanwhile the battle for compensation dragged on. Six years after David was found not guilty, a new Justice Minister, Amy Adams, became involved. She appointed retired Australian judge, Ian Callinan, to write yet another report. Read about Callinan’s dodgy ethics and controversial appointment as a judge in Australia here.  Observers pointed out that the Government seemed to be cherry-picking – looking for a judge who was willing to give them the result they wanted. Callinan certainly fitted the bill. He conducted a superficial investigation and concluded, without even meeting him, that David had not proved his innocence.

Who won the compensation battle?

Despite getting the result they wanted, after treading water for six years, the Government was in a difficult position. The vast majority of New Zealanders thought David was innocent and should be compensated. In the end the Government gave David $925,000 but refused an official apology and claimed the payment wasn’t compensation. Former ACT Party leader, Rodney Hide called the Government’s decision A $1 million betrayal of justice and said:

“The best that can be said is the long saga is over. The warring sides have packed it in, without a winner or a loser, too exhausted to fight on. And there’s the problem. The Government should never have gone to war.” 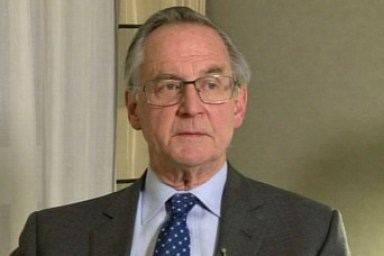 Opinion polls show that about 70% of New Zealanders agreed with Justice Binnie  that Davidf should receive compensation. But Judith Collins, who replaced Simon Power as Justice Minister, refused to accept the Judge’s conclusions. She claimed Binnie was biased and that he’d made numerous errors; to back up her claims, she sought feedback on the report from both the police and the Solicitor-General. While obtaining this feedback, she refused to allow Bain’s legal team to even see a copy.

Ms Collins then ordered a peer review of the report by former High Court judge, Robert Fisher.  She subsequently leaked Fisher’s criticisms of Binnie’s report to the media and then issued a press release. In essence it said:

“With the consent of the Attorney-General, I received advice from the Solicitor-General on the report…My concerns are broadly that the report appeared to contain assumptions based on incorrect facts, and showed a misunderstanding of New Zealand law. It lacked a robustness of reasoning used to justify its conclusions.”

This led to an embarrassing public spat with Justice Binnie who, by this stage, had left the country. In response to the press release by Collins, Justice Binnie sent her an email saying it was unfair that she had not given a copy of his report to Bain’s legal team. He also pointed out that he is the sixth overseas judge (after the five judges on the Privy Council), to reject the arguments of the Solicitor-General and Crown Law office of New Zealand from whom she sought advice. Binnie went on to say:

“It is a curious feature of this case that all of the “external” judges who have looked at the record of the case have rejected the arguments of the Solicitor General and the Crown Law Office regarding David Bain’s guilt.”

Watch TV3 interview  with Justice Binnie on 12 December 2012 in which he responds to Judith Collins’ criticisms of his report and her ‘unfair’ handling of the case allowing the Solicitor General and police to see a copy but not David’s legal team: “It’s just so fundamental that you listen to both sides…  and that’s the basis I expected the Minister to live up to… It’s just elementary fairness that you don’t go behind the back of one party and deal exclusively with the other…” (7:43). 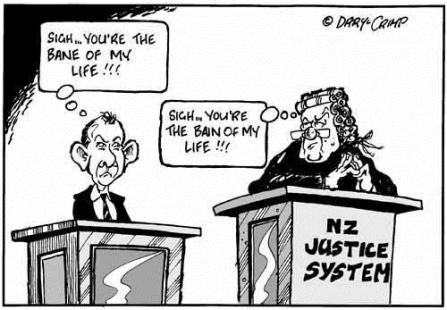 “Acted in bad faith, abused her power, and acted in a biased, unreasonable and predetermined manner”. 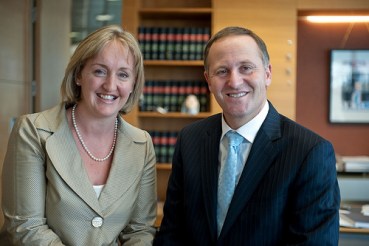 Amy Adams with former Prime Minister, John Key – who is on record saying David has to prove his father killed his family in order to receive compensation

While this review was winding its way through the courts, Collins was also accused of a conflict of interest over Oravida and then got caught up in the ‘Dirty Politics’ debacle. She resigned from her position as Minister of Justice in August 2014.  Bain’s legal team dropped the judicial review proceedings after Ms Collins was replaced by a new minister, Amy Adams (left), who appeared to be more reasonable to deal with.

But in February 2015, after consulting with her Cabinet colleagues, Ms Adams made the extraordinary statement that: “The Government did not have enough information to reach a decision on a potential payout for Mr Bain.”  What she really meant was that the Government did not yet have the recommendation it wanted to avoid making a payout. Ian Callinan: a ‘colourful’ past

Ms Adams subsequently appointed Ian Callinan, a retired High Court judge from Australia to conduct a second investigation to the compensation claim. Callinan has a controversial background. He had close links with the Queensland Government and, in his first case as a judge on the High Court, he was forced to stand down because of perceived bias towards the Government’s position in that case – see About Justice Ian Callinan.

On 18 February, 2016, the NZ Herald reported that Cabinet had received Callinan’s report  which “found that Bain did not meet the threshold of ‘innocent beyond reasonable doubt’,”  and said this dealt “a blow to Bain’s compensation claim for wrongful imprisonment”.

After Judge Ian Callinan’s decision was leaked to the media on 18 February, 2016, radio talkback host Mike Hosking rang Ian Binnie in Canada to get his comments (3:55).  Comparing the case to that of Lindy Chamberlain in Australia, Binnie said:  “This case is becoming quite well known internationally. I just don’t think the New Zealand Government has a leg to stand on.”

​But Callinan provided the gimpy leg the Government needed.  He conducted his investigation into the case but never met with or interviewed David as part of that investigation.  Nevertheless, when Justice Minister Amy Adams finally announced the Government’s decision in August 2016, she also released the full report which said:

“The applicant has not proved on the balance of probabilities that he did not kill his siblings and his parents on the morning of the 20th June 1994” (para 407).

David was quoted  in the media as being ‘disgusted’ that Ian Callinan formed his opinion without even bothering to interview him.  He said his rights were “completely abused” by Justice Callinan  who made “extremely hurtful” comments in finding Bain had not proved his innocence “on the balance of probabilities”.  Failing to allow a witness to respond to criticism was one of the reasons the 2012 report by Canadian judge Ian Binnie, was discarded by Judith Collins (on Robert Fisher’s advice).

Joe Karam described Callinan’s report as a ‘train wreck’. He said it contained  numerous issues of concern  and said Callinan had made many of the same “mistakes” that Binnie was accused of. He pointed out that whereas Binnie’s report was rejected because of these alleged ‘errors of principle’, Callinan’s was accepted – because it suited the Government’s stance on the case.  The defence team informed the Government they intended to challenge the quality and integrity of  Callinan’s report in court. See the Flaws in Callinan’s report.

Despite the fact that Ian Callinan gave the government the outcome they wanted, John Key’s team still gave David $925,000  – but  tried to claim the payment wasn’t compensation. National gave him the money on the condition that his legal team dropped the judicial review of Callinan’s report and all further legal claims. Having waited six years for the battle over his compensation to be resolved, David reluctantly accepted this settlement.
… not quite
In 2017, journalist Martin van Beynen and Stuff decided they could make money out of the David Bain saga and published a myopic and biased podcast about the case called Black Hands.