Few people know how David was affected by the traumatic events that unfolded in his life after he got home from his paper run on 20 June 1994 and found his entire family had been shot – and the public exposure that he still experiences 20 years later. This page gives some insights into the pain, humiliation and on-going invasion of his privacy that David experienced both in prison and in the community once he was found not guilty.

What happened to David Bain in prison

Once David was arrested in 1994, he was initially held on remand in the Dunedin prison.  Seventeen years later (after he was eventually found not guilty), he was invited to speak at an international conference on injustice and wrongful convictions in Perth. Other speakers included Rubin ‘Hurricane’ Carter and Lindy Chamberlain.  In his speech, David described his first night in prison [full transcript here]: 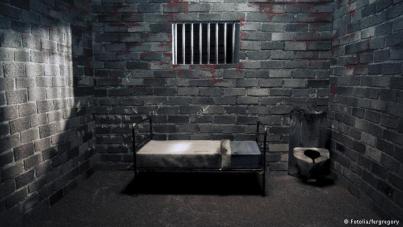 Stock photo of a prison cell similar to David’s

“There was a mattress on the floor, a bucket in the corner, two blankets and a steel reinforced door … After all I had been through in the week … trying to reconcile myself to what had happened; all I could do was cry myself to sleep.  After a very restless night I tried desperately to get somebody to let me go to my family’s funeral but between the insistence of the police and my relatives’ reluctance I was not allowed to attend. Another shattering blow to this day I feel the pain of being denied the basic right of saying goodbye to my family.” 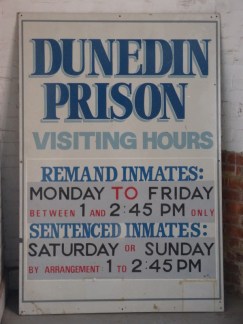 “My initial state ranged all over from bouts of hysteria and panic to being overwhelmed by the entangled mess that was far too awful to unravel – through depression and extreme periods of loss and loneliness to an almost zombie-like state. It affected my appetite and sleep patterns such as they were and eventually I was diagnosed as being clinically depressed. From this time on, my emotional, physical and mental health went all over the show as year after year, first my lawyer and then subsequent teams of lawyers and friends battled against the system.”

“For the first 12 months I spent on remand, I was confined to my cell 22 hours a day and checked on every 15 minutes for 12 months – every single 15 minutes – they turned the light on because they thought I was a risk to myself.”

Attacked by other prisoners

“My contact with others was limited as my security classification was higher than the bulk of other prisoners. This meant that I only had contact with the worst offenders  – those that caused the most problems within the prison.

“I was regularly the object of derision and cruel jokes from other prisoners, especially when something new about my case was published in the newspapers or broadcast on television. “

“Shortly after being imprisoned in the east wing of Christchurch Men’s Prison, I was assaulted by another prisoner and left with two teeth smashed in and a bruised and cut face. Both teeth required surgery and ongoing repair over the years.”

“This was the first, and most severe, assault that I endured and resulted in me suffering severe psychological trauma. During the years that followed, several other prisoners assaulted or confronted me.”

When interviewed by Judge Binnie for his compensation claim, David told him that life in prison had been almost unbearable and he had seriously considered killing himself: 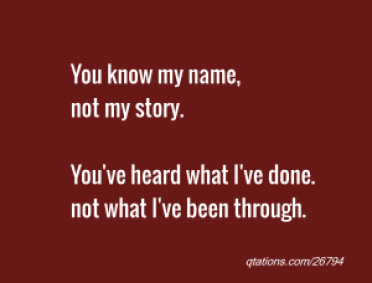 “When I was first imprisoned I was put on suicide watch which involved the prison officers turning on my cell light to check on me every 15 minutes [which] effectively became a means of torture. I suffered constant migraines, depression and loneliness.”

“I saw in a newspaper, passed through my cell door, the photo of my family home being burned down. I had known about my uncles’ decision to do this, but seeing the evidence in such an impersonal way, without even a phone call, robbed me of any remaining strength and I began to spiral into depression…

“The separation from the world is the worst punishment the state can impose. I struggled to hold on to my sanity and underwent over eight years of counselling. There were times when I considered giving up the fight and ending the suffering by taking my life.

Before being charged in June 1994, David was a member of the local harriers club, took part in triathlons and had been to outward bound. He sang in the Royal Dunedin Male choir and was studying for a degree in music and drama. He had been hoping to pursue a career as an opera singer or a teacher. He told Judge Binnie:

” In 1992, my singing teacher told me when I started lessons that I had a wonderful voice and that I could one day create a valuable career for myself.

“Since my arrest in June 1994, I have not taken part in any form of musical expression as the trauma of the events I experienced has taken the joy of music away from me. The wrongful conviction of me and the time I spent in prison meant that the life I was planning has gone out the window. I feel as though I lost the major earning years of my life.”

As well as losing his freedom, his youth and his reputation, David lost all his and his family’s personal possessions. He lost his inheritance, including proceeds from the sale of his family home (after the house was burnt down), and other property.

Watch a Youtube clip of the house burning down less than three weeks after his family were killed (1:56).

After his conviction in 1995, the proceeds were distributed to members of his extended family. In his claim for compensation, his lawyers pointed out:

“Had the miscarriage of justice not occurred, Mr Bain would have received his rightful inheritance from his parents’ estate in the sum of approximately $350,000 in 1994. Those funds were distributed to Mr Bain’s extended family many years ago on a wrong premise.”

What happened to David on release 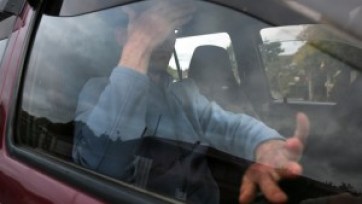 David told Judge Binnie that from the time of his release on bail in 2007 he found “the hardships of life far greater than he had imagined in prison”.  He said:

“It is not a comfortable thing being known for something as traumatic as the events I have suffered through. The media coverage has meant that the New Zealand public know a great deal about these events and my personal life. Everywhere I go, and in everything I do, I am always recognised and either comments are made or people question me.”

This happened wherever he went in New Zealand, and David said he had to find some way to deal with it. At the interview with Judge Binnie, he expanded on the difficulties he faced: 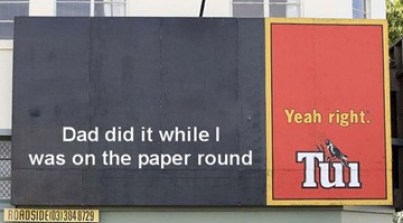 “Not only have I served 13 years in prison, I’ve also served the so-called sentence of being labelled a convicted killer and a murderer and you know, a monster, and being told on a daily basis that I’m a psychopath and I was psychotic and all these various, horrible, you know, psychiatric issues and all this … I’ve had all of this to deal with and so the pain and the anguish that I have felt has been, you know, from the original mourning has been compounded time and time again.”

David was interviewed by TV3 in 2012.  Watch this excerpt from the interview  where he talks about his life, the loss of his family, and his struggle to lead a normal life once he was released from prison.

“I became more and more depressed by the legal teams’ ongoing battles to achieve anything in the courts. I knew I was becoming institutionalised as each year ground past and I hated myself for falling into that trap…

[Once I got out] I guess the hardest part was just getting used to walking down the street and being able to open the door by myself without having to wait for someone else to open it for me, eating stuff out of the fridge when I felt like it.” 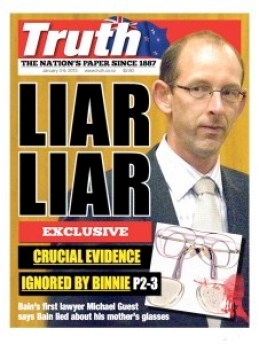 Cameron Slater’s (aka WhaleOil) version of the truth

Going out in public

In 2011, David was interviewed by New Idea magazine about fleeting romances and the ’emotional walls’ he has had to build to cope with life.  A few months after he was released from prison, David went on a trip to Europe. He said it was only while overseas, where nobody knew who he was, that his“constant guard and awareness all just melted away.” He admitted there were times when he seriously thought about disappearing to some remote South American city rather than return to the public glare awaiting him in New Zealand.

“Walking around the streets of New Zealand, my guard is always up. It’s a protective thing. It’s something I’ve developed over the years of being in prison.”

“I’ve had a couple of uncomfortable situations.  People ask me questions all the time. But these are people who obviously don’t believe that I’m innocent. They have their own opinion, and they’re perfectly entitled to believe that. It generally comes with the Dutch courage from a few wines.” 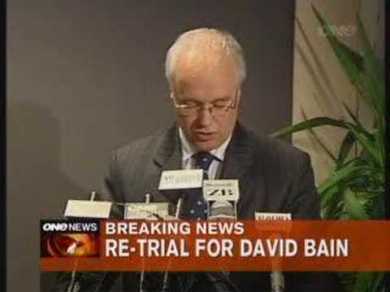 David was diagnosed with Post Traumatic Stress Disorder and had counselling in prison for years on end to help him cope with the loss of his family and the trauma he endured. (See Professor Philip Brindid’s psychiatric assessment.) Once he was released, the legal battles and the publicity continued and David still needed help to make sense of it all. He has now attended counselling for over 18 years.

In 2012 he told the Herald on Sunday that the memories of his dead loved ones continued to haunt him:

How is David doing now?

David works at an engineering firm in Christchurch. He got married in 2014 and now has a baby boy. Highlighting the intrusive nature of the media into every aspect of his life, shortly after the wedding ceremony began, the celebrant was interrupted by three helicopters flying overhead commissioned by three different news outlets. 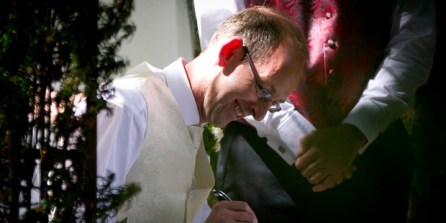 David signing the register at his wedding in 2014

New Idea magazine asked him about his financial situation:

Although he’s getting back on his feet, David says money is tight. “I’m having to do everything from nothing. I’ve had to do a catch-up of 15 years. I’ve had no income. I’ve managed to put some money aside from my prison earnings, but that’s next to nothing – $25 a week was the top wage when I was there, and you’re working for it.” David says he feels resentful about having to start his life from scratch and is getting to grips with what it costs to be independent.

Clearly, David is doing his best to get on with his life, but it has been a long hard struggle.  The  $925,000 ex gratia payment he has now received will no doubt help.  But the Crown should have admitted its mistakes and offered him an apology as well.