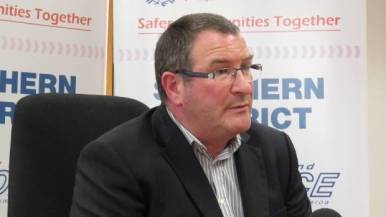 Detective Senior Sergeant Kallum Croudis is one of Dunedin’s longest serving detectives.  He was the officer who arrested David Bain in 1994, four days after the shootings without  bothering to look into the allegations of incest by Robin Bain or concerns about Robin’s mental health.  Judge Ian Binnie concluded in his report years later that the police team, in which Croudis was a leading player, committed numerous egregious errors during the investigation.

Kallum Croudis was also involved in the re-investigation of the case prior to the second trial at which David was found not guilty.

In 2016, Croudis became involved in a case where a woman, who has name suppression, allegedly supplied morphine to a 39 year old man who subsequently died. Two days later, the post mortem revealed the man had a pre-existing medical condition and died of a rupture of the oesophagus.   Although he had morphine in his system when he died, it was found to be at a therapeutic level and did not cause the man’s death. However,  Croudis arrested the woman and charged her with supply of the class B drug.

When the case went to trial in 2018, Judge Michael Crosbie was highly critical of Croudis‘ decision to charge the woman who clearly was not responsible for the man’s death.  Because of the judges criticisms,  the matter was referred to the IPCA.  The IPCA found Croudis had failed to make notes of his conversations with the accused in which he alleged she confessed to supplying morphine to the man who died, such that it was unclear if she ever made such a confession.  The Judge in the case ruled that the woman’s statement had been ‘improperly obtained’ and could not be used to prosecute her.  Read the IPCA report here.

Similar allegations of incompetence were among the many criticisms leveled at police by Judge Ian Binnie over the investigation into the death of the Bain family 24 years earlier.  See page 159 of Judge Ian Binnie’s report for more detail.